Well, today’s blog is probably going to be pretty short and not particularly exciting, but I shall blog it anyways. I’m in a pretty good mood. I spent today actively avoiding leaving my apartment–partly because it was 40º this morning and partly because I just wanted to stay in and watch TV and work on job stuff and catch up on emails and whatnot.

Last week, I had an in-person interview on Tuesday, and that same afternoon, I went through a phone screen interview. I was told by the woman interviewing me over the phone that I would hear from her on Monday morning (aka today) if I make it to the next stage of interviews: in-person interviews. I was pleased to receive a call from her this morning asking if I was available to come in for an in-person interview Tuesday morning. (Obviously, I said yes.) I also received an email from someone at a different company that I had applied to asking if I was available for a phone interview on Tuesday as well. (More good news!) So of course, I’m very excited about making ACTUAL progress in my ongoing job hunt tomorrow. 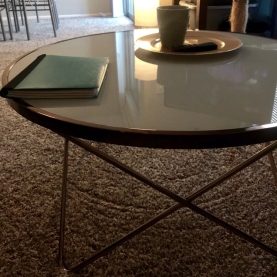 My goal was to spend the whole day without leaving at all, but I was notified by my complex of a shipment arriving for me at the office. (I wasn’t expecting anything, though.) Much to my surprise (and delight!), my new coffee table I had ordered on Amazon arrived two days early! Despite the fact that I had to haul it from the office to my apartment because it wasn’t delivered to my door like my furniture usually is, I was very excited! After opening it all up, I realized it would be slightly more complicated to put together than I anticipated, but after a few minutes I figured it out and got to work. Check it out! I love it!

So yeah, today’s blog is primarily about me wanting to talk about the things that are going well for me today. That may or may not be interesting for people, but I don’t know, sometimes it’s nice to just actually take a step back and think about how good I’ve got it. I live a pretty good life, and sure I’m allowed to have my bad days, but ultimately I live a good life. I have people who care about me, I have opportunities (hopefully) coming my way, and I live in a cute apartment and have a cute and cuddly kitty. It’s not a bad life to live.

“Be in love with your life. Every minute of it.”